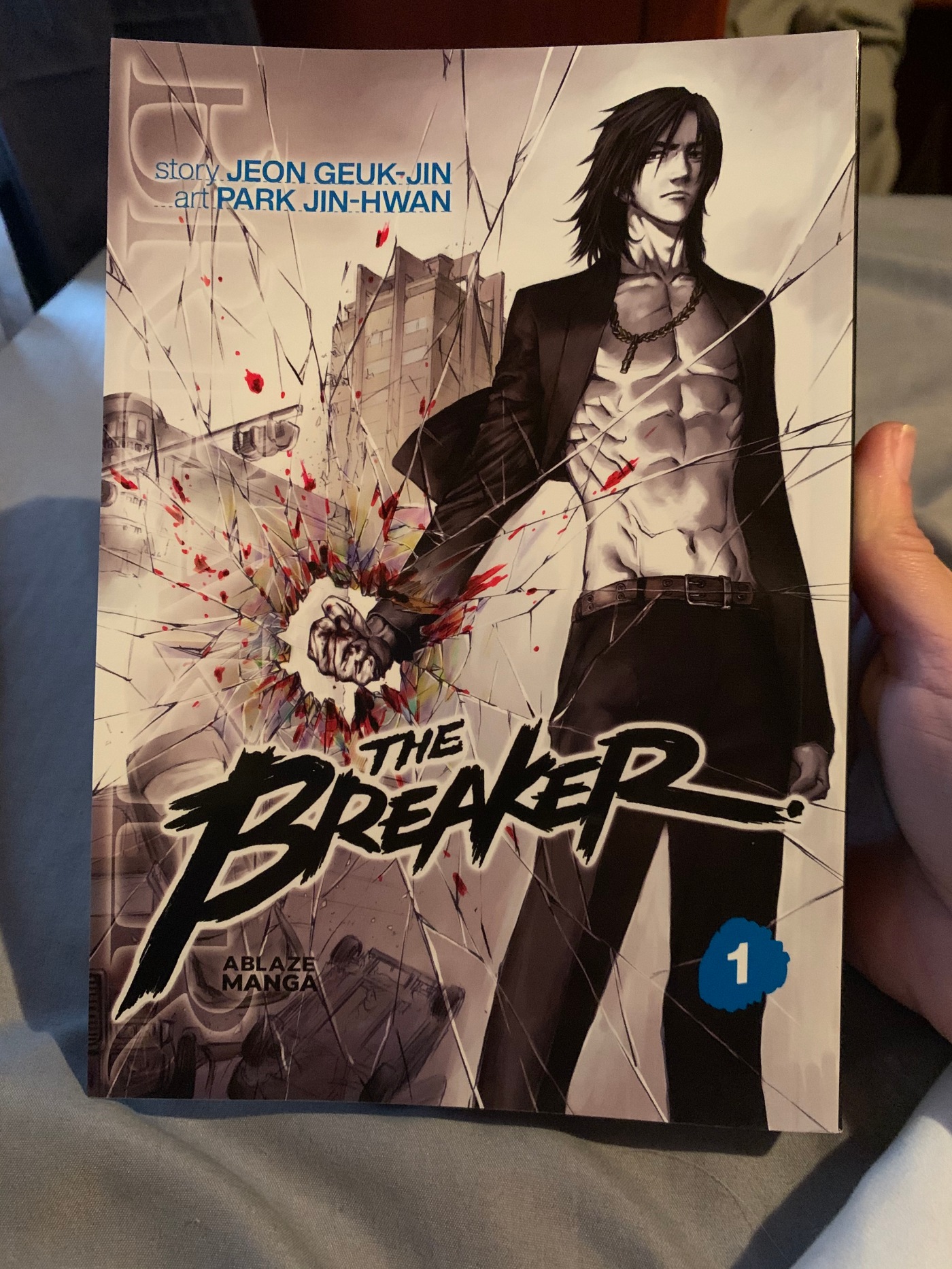 You heard it right, this is the first Manhwa (korean manga) I have ever read. I just got into manga a year ago and haven’t really ventured into other realms. I was at Barnes and Noble and saw the hot guy on the cover of course, flipped through the pages and saw the amazing art, then read the summary and decided to buy it and I am very happy I did. I did not even know it was a Manhwa until after reading. Apparently this is a very popular Manhwa so I am actually behind instead of thinking this was a brand new gym.. but if you are like me and have never heard of this or are thinking of reading it, onto the review!

Before even getting into the series, I would like to talk about the quality of the omnibus which is two volumes. It is published by Ablaze Manga which I had never heard of but thank you for bringing this to English and in such a nice way! The volume is taller than normal manga which gives you more room for the amazing art and the pages have a super nice and clean feeling. It is very easy and satisfying to read.

This Manhwa follows two main characters; Shi-Woon who is highschooler struggling with bullies and life in general, and Han Chun-Woo who becomes Shi-Woon’s substitute teacher. Shi-Woon was getting beat up by a mean group of classmates as he did everyday when Shi-Woon saw what happened and kind of just laughed and called Shi-Woon a coward who will always get beat up. You can already see from this part that he will not be a normal teacher by any means.

The two always run into each other in random situations including when Shi-Woon saw Chun-Woo in an alley getting beat up by a group of guys. All of a sudden the weird, careless teacher beat the shit out of all these thugs and Shi-Woon, shocked recorded it all. He then decides to change his life, stop being a coward, and get his mysteriously great fighter of a teacher to train him.

Different Genres Mixing Together So Well

This Manhwa has a good amount of genres coming together and does this better than almost anything I have read. We obviously have a lot of action, this is a martial arts Manhwa after all. We have a psychological underdog story about Shi-Woon’s daily struggles at home and school that are driving him over the edge and wanting to give up completely. Then with his change of mind he is so determined to learn how to fight he does basically anything his teacher asks just to get trained by him. It is all very powerful and I am sure many can relate to some of these feelings.

Then we have a genre I am not a fan of and usually would not want in this type of series and that is comedy…. That being said, the comedy is done so well in this manhwa and makes the entire thing even better. I laughed at this more than I have at any manga (which is hardly ever). the comedy does not take away from the seriousness of the plot but comes out at surprising times and will definitely give you a chuckle. The main source of comedy being Chun-Woo who is very serious and cool at times but others is like an immature, perverted 12 year old. His character is drawn differently according to which persona he is in at that period of time.

There are even some examples of almost breaking the fourth wall like characters saying “How do you not remember me? I was in Volume 1!”. Or The author filling a page with all black and saying this is a waste of a page.

The Manhwa is pretty explicit with swearing and sexual content. Nothing too explicit just some ecchi and conversations revolving around sex. I am not a fan of ecchi and would not consider this manga ecchi just some pages here and there and Chi-Woon’s complicated relationships with the women.

All in all this is one of my favorite things I have read this far and that says a lot. I loved every single thing about this volume and am devastated I am going to have to wait for more to come out including the sequel “The Breaker New Waves” which also seems to have amazing reviews. I am so glad I found this series and am sure it will continue to be a favorite of mine. Maybe I should get into more Manhwa…? Anyways let me know your thoughts below!

2 thoughts on “My First Manhwa! The Breaker Omnibus 1 Review!”